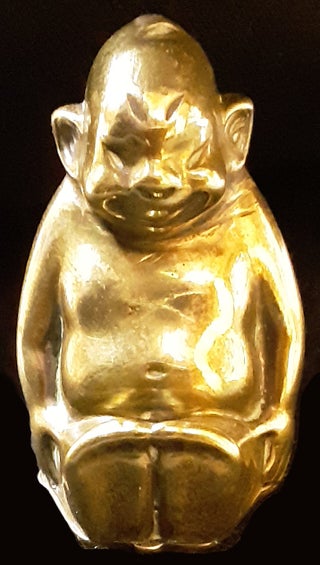 This is not a reproduction. This in an original 1908 Billiken Vesta Case Match Safe, Made in Germany. The Billiken is a charm doll created by an American art teacher and illustrator, Florence Pretz of Kansas City, Missouri, who is said to have seen the mysterious figure in a dream. It is believed that Pretz found the name Billiken in Bliss Carman's 1896 poem "Mr. Moon: A Song Of The Little People". In 1908, she obtained a design patent on the ornamental design of the Billiken, which she sold to the Billiken Company of Chicago. The Billiken was monkey-like with pointed ears, a mischievous smile and a tuft of hair on his pointed head. His arms were short and he was generally sitting with his legs stretched out in front of him. Billiken is known as "The God of Things as They Ought to Be". To buy a Billiken was said to give the purchaser luck, but to receive one as a gift would be better luck. The image was copyrighted and a trademark was put on the name. After a few years of popularity, the Billiken faded into obscurity. Although they are similar, the Billiken and the baby-like kewpie figures that debuted in the December 1909 Ladies' Home Journal are not the same. Today, the Billiken is the official mascot of Saint Louis University and St. Louis University High School, both Jesuit institutions located in St. Louis. The Billiken is also the official mascot of the Royal Order of Jesters, an invitation only Shriner group, affiliated with Freemasonry. The Billiken also became the namesake of Billiken Shokai, the Japanese toy & model manufacturing company (established 1976).

Hinge is good and tight, and the lid closes properly. Still retains its original finish and patina.

This is an extremely rare piece from Michael's private, personal collection. 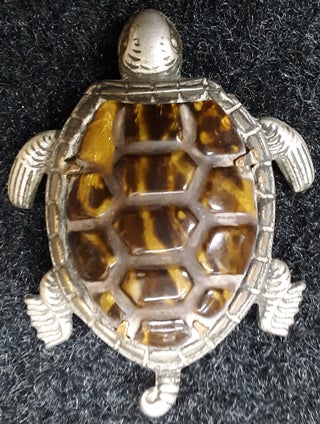 This is a rare piece from Michael's private, personal collection. 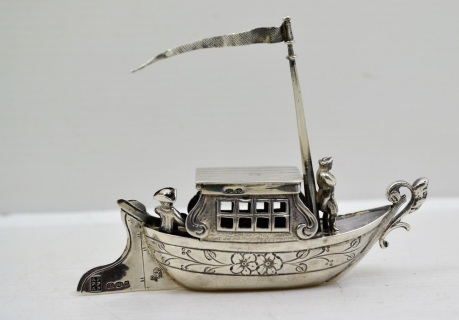 It has a lift up lid with a strong hinge. Below is an open space for the small matches. The hallmarks are all good and clear. Condition is excellent.

The roof mark rubbed with a m for Schoonhoven, dutch date mark p = 1908 below the lid rim.

This is an exquisite and extremely rare piece from Michael's private, personal collection and would be an ideal addition to any fine sterling miniature collection.. 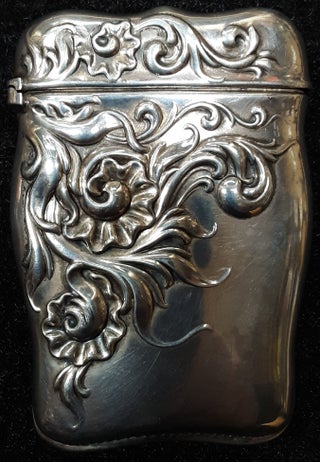 Collectible vesta case by a reputable company. Hinge and tension rod are excellent. Lid snaps closed and is perfectly aligned with no issues. 29.8 grams / 1.05 oz. 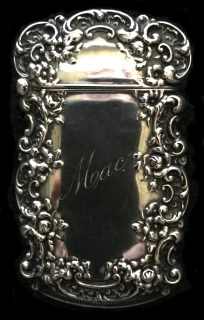 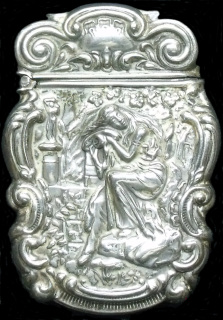 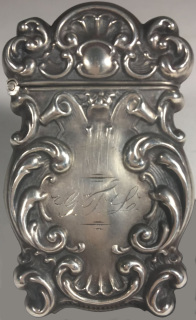 Beautiful scroll repoussé design on this antique, sterling silver match safe. Hinge and tension rod are good and tight. Lid snaps closed and closes straight with no gaps, no issues. Seams are all good. Inside, including the tension rod, looks like it was never used. Still has all of its original gold wash interior. No repairs or major flaws. Marked Sterling and weighs 15 grams / .53 oz. Monogrammed "GTL". 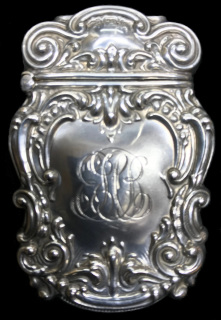 Beautiful scroll repoussé design on this antique, sterling silver match safe. Hinge and tension rod are like new. Lid snaps closed and closes straight with no gaps, no issues. Seams are all good. Inside, including the tension rod, looks like it was never used. Still has all of its original gold wash interior. No repairs or major flaws. Marked Sterling and weighs 22.6 grams / .80 oz. Monogrammed "EHB".

This is a very beautiful and dainty match safe. It is marked Sterling and r-122. The lid snaps shut nicely and closes perfectly with no gaps or issues. Tension rod and hinge are perfect. Seams are perfect. A couple light scuffs and tiny dings indicative of its age. Weighs 21.1 grams / .74 oz. Monogrammed "DER". 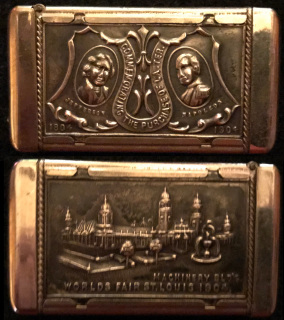 A very nice example of a souvenir match safe / vesta case from the 1904 St Louis 1804-1904 centenary World's Fair. On one side are cameos of Jefferson and Napoleon and on the other the Machinery Building 02 from the 1904 fair. The hinge and lid close nice and crisp. 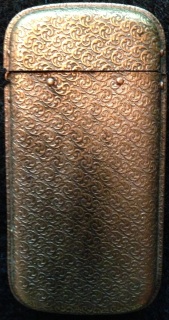 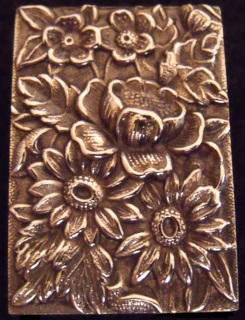 American Sterling Silver match box cover in the Repousse pattern by S Kirk & Son. 90F and includes a box of La Petite matches. This handsome cover is 1 5/8" long, 1 1/8" wide, silver weight is 21 grams. The original condition and crisp detail, with no monograms, removals, repairs or alterations, make this an especially attractive piece. The soft, warm, original finish is present, with no buffing or machine polishing. 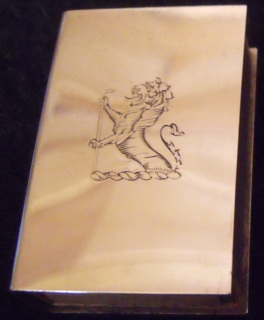 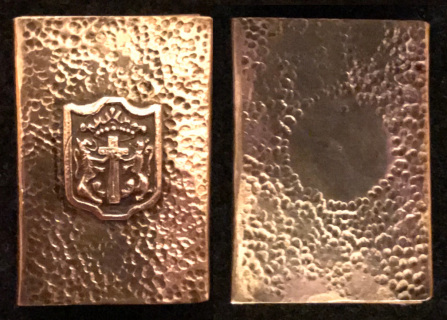 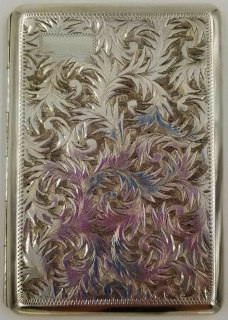 This beautiful Sterling Silver Cigarette Case has deep, hand engraved chase work and boasts a very unique sterling silver double spring chain. The case has a very clever way of opening. The top must be slid upwards and a hinged spring pops the lid open. To close, close the lid and slide the lid back down into the locked position. The hinge is extremely strong and sturdy. The entire case is in excellent condition and very well made with thick, heavy 950 silver. Could also be used as a wallet to hold currency, credit cards, business cards, etc. Measures 3 1/4" wide x 4 5/8" long x 3/8" thick. Weighs in at 149.4 grams / 5.27 oz. 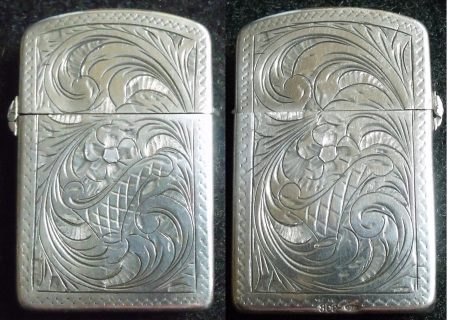 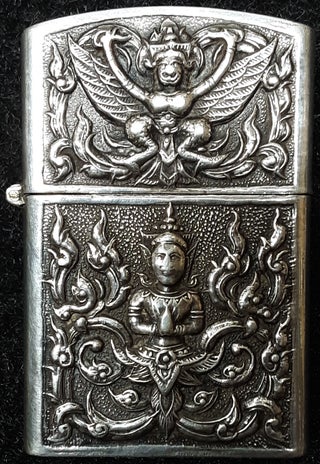 This absolutely stunning and intricate lighter is beautiful. Case is made from solid Sterling Silver in Siam and weighs 27.7 grams without insert. The insert is like new and comes with a brand new flint and wick. Zippo lighters carry a lifetime warranty through Zippo themselves. Would make the perfect gift for the Tobacconist in your family or even yourself! 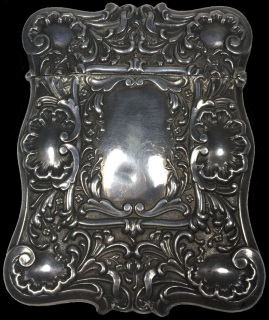 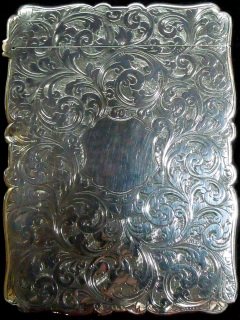 Fredrick Marson, one of the most prolific and imaginative silversmiths of the 19th century, designed this exquisite piece in Birmingham, 1891. Handcarved in Acanthus leaf and scroll decoration, with a blank central cartouche to personalize it with your very own initials. Minor dings to corners. Can easily hold full size business cards, license, credit cards, currency, etc. Fully hallmarked with the maker's mark (FM), the anchor (Birmingham Town Mark), the lion passant (Sterling Standard), and an "r" (Year 1891). Made of 57.2 grams / 2.02 oz. Sterling Silver. 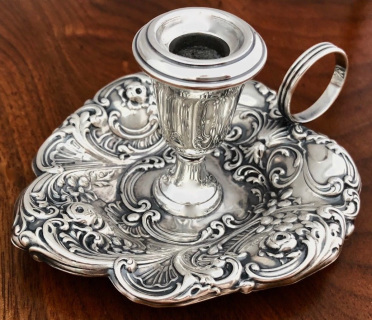 Awaiting your purchase is a beautiful sterling silver chamberstick fashioned by the silversmiths of Gorham Co. of Providence, Rhode Island. The heart-shaped drip bowl is decorated to the outside with a repoussé rococo design. This charming and useful item is in excellent antique condition and bears no monograms. Fully hallmarked Gorham Sterling 324. Measures 2 1/4" tall X 4" Wide. Weighs 42 grams / 1.47 oz. 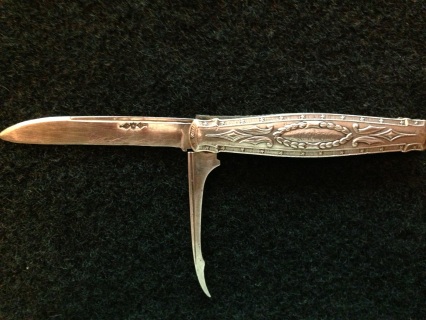 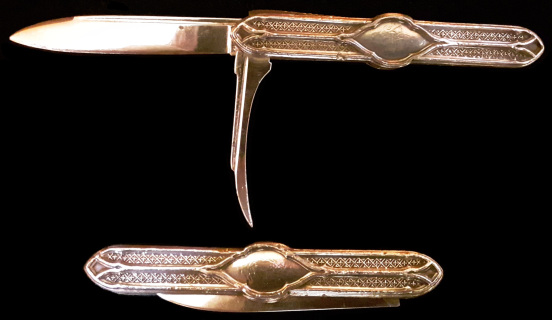 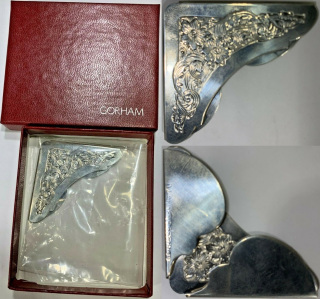 MUCH MORE TO COME!!!

WE OFFER COMBINED SHIPPING. NO HIDDEN OR ADDED FEES. ONE LOW PRICE SHIPS IT ALL!
CLICK HERE FOR MORE INFORMATION ON OUR SHIPPING POLICIES.
​
© ​Copyright 2007-2022 The Eagle Empire
Powered by